Fall leaves are the grandest sunset. There is a gradual change from yellow to orange to red that follows the progression of the sun setting over several months as the days get shorter and crisper. When the leaves start to turn, the weather also has shifted, and this brings an exciting feeling to the air. People become more active, shrugging off the apathy of summer’s heat to travel, exercise, and do all of those things that neatly escaped the months of leisure. The panoply of colors from green through purple gives rise to a patchwork firework show caught in suspended animation. This is the glory of nature and the spirit of perseverance. It feels as if each plant is sending itself off for the winter with a grand party and a solemn vow to return when the cold is through.

The colors of the leaves begin to show around the edges or nearly hidden in the interior of the trees. The undergrowth may have its own fall as in the Rocky Mountains where the trees stay green as the geraniums, ferns, and other perennial herbaceous plants prepare for the cold onset of winter. The trees then follow suit, and each has its own pace and progression. Some rush through the colors to a bright red in a few short days while others gradually shed their skins outward from the core until there are just a few, blood-red leaves clinging to the end of each branch. Some trees even send one branch at a time along so that there will be entirely green, red, yellow, and orange sections of the tree. It is hard to believe that it is just one organism, but the display put on is intriguing, artful, and stately.

The colors, particularly of maples, reflect from the leaves, or they can show their splendor as the still-bright sun filters through each leaf, lighting it. The greatest displays come with those leaves that seem to give off their own glow as though the loss of the sun would stop not at all their radiance. It is in these trees that I can see Tolkien’s creation of the glowing trees Lauralin and Telperion, 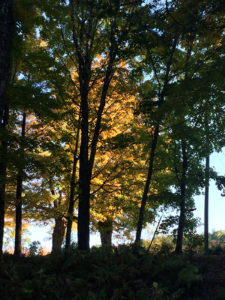 whose single blossoms became the Sun and the Moon. In these are my inspiration for Fall Christmas lights, and in these the celebration of fall comes to its height. The season continually progresses as different micro-climates and species move their sap at different times. The subtlety of variation in hue and shade are at no time more pronounced than the unique aspects of every single plant in the fall.

I particularly like the colors of Nanking Cherries, Smooth Sumac, Amur Maples, and Cotoneaster. Each has the similar quality of showing off a grand variety of colors at the same time, yet each has a different leaf-shape, timing, and brilliance. The Nanking Cherries have an underlying white on their ruffled leaves, dusted with a reverse-frost of color. Sumac are almost miniature palm trees with neon fronds illuminating the still green leaves above. Amur maples ripple up and down with their colors until greens go to yellow, orange, and a red so deep it is almost purple. Co 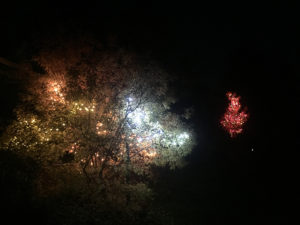 toneaster have little, circular leaves that seem to burst into color from the inside of the plant in alternating patterns that give a pointillistic array of a sparkling firework. There are other trees and colors to be seen as in the Ash, which grow more beautiful every year.

This year, I finally made it to Maine for the peak of the fall leaves. There was once a painting of fall in the Eastern United States with all of the glorious colors that could be put on a canvas. The painter was trying to capture something that their patrons in Europe couldn’t comprehend-that so many colors could exist in so many trees. I believed, for my family had come from the east and told of the leaves in awed and wistful tones as in the stories of my childhood. They would speak of whole hillsides filled with brilliant colors that we have only in a few bushes if we are lucky. There was no exaggerating. I have spent hours staring out the window in rapture over the colors. Each tree and patchwork of plants are the embodiment of stories come to life and there is everything from the purples of frost-nipped leaves to trees in grand transition of each color to the lone maple, entirely red against a screen of orange or yellow. Trees emerge from the undergrowth to shout their beauty despite being hidden most of the year, and in this season, the deciduous reign supreme, conquering the few pines in every manner of color, successful growth, majesty, evolutionary strategy, beauty, contrast, and preparation. There are few times I have considered my garden to be lacking, and there are fewer that a relatively flat location sets me into sensory overload, but the sparks have been flying in the colors of Autumn.