Dragons are one of my defining characteristics. People often ask why I like dragons. They are the antagonists most of the time after all: evil, chaotic, greedy, destructive, vindictive, et cetera. The thing is that my earliest encounters with dragons did not feature the paragons of destructive beings. The first dragons I can remember encountering were those of Krynn and Dungeons and Dragons. When I was young, my sister found the Dragonlance Chronicles on book on tape from the local library, and I slowly got sucked into the stories. I can’t remember if she pushed me to listen or if I just happened by when she was listening, but I was entranced. The story certainly has evil dragons that feature at the crux of most conflicts. However, there is a large turning point in the series with the introduction of the good dragons and their god. Thus, the introduction of dragons that I had proposed evil dragons and then counter-balanced them with good dragons. Right away there was a variety of dragons, their appearances, their breath weapons, and their temperaments.

Dungeons and Dragons introduced the next stem as my brother and his friends got into board games based off the role playing game. I would play some, and this is where I came to like mages and elves as well, but I spent countless hours staring at the seven dragon description cards for the game. Here again were dragons that breathed lightning, not fire. Golden dragons that were good and, unlike most tropes, had more awesome abilities than the bad guys did. The evil dragons were formidable, but the good dragons could handle an evil dragon, one on one, hands down. The DM, incorrectly interpreted as the Dragon Master became a center of the stories that floated through my mind and the games of make believe that I would play with friends at the time.

I started creating my own dragons, creatures that had godlike amalgamations of the powers of all the other dragons. They became the turquoise and white cyclone dragons which looked like Vertigo from the video game Primal Rage, who had a spike on her tail, a cobra’s hood, and the ability to spit venom. Cyclone dragons have wings and more extensive breath weapons and magical powers. The combination of many of the things I liked most at the time. These dragons fought for the side of good, and appeared in most fantasy settings I could think of or encountered. The cyclone dragons eventually transitioned into dracs, which were simultaneously an update on my interests to include chameleon skin and prehensile tails, and an attempt to un-deify the dragons a little bit by removing their breath weapon. The dracs bravely fought against the slavery imposed upon them by dragons and would join the Animorphs in fighting the Yeerk invasion. As the years have gone by, the dracs have stayed at the forefront of all things I have ever created from my imagination, and they continue to evolve in their powers as my mind changes. Right now, they have a huge component of their power stemming from chemistry and the manipulation of protons and electrons.

Still, my interest in dragons has remained strong. I wrote and spoke about them in high school for academic decathlon. I have slowly accumulated a wide variety of figurines and books about dragons, and they are a go-to gift to me 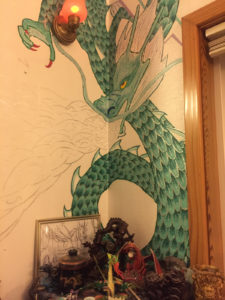 . The reason I like them so much at this point boils down to this (insert “, which I like,” after each listed item): they are reptiles, they can fly, they are intelligent, they can do magic, they breath fire, they are inspired by thunderstorms and volcanoes, they are found in myths worldwide, they are strong, they are composed of the strengths of different animals, they are not necessarily evil, and they control the weather.

Smaug, the dragon of The Hobbit is perhaps the most infamous of the dragon antagonists lurking on his hoard of stolen gold, trading and deciphering the riddle-making of Bilbo Baggins. The menace and devastation he creates is a grand testament to the destructive capability of an epic antagonist. He is the inspiration for so many other dragon antagonists in the fantasy genera and arguably the inspiration for red dragons in D&D. From the red, fire breathing dragons come the various colors of Krynn, which produced Skye, the blue dragon with lightning breath and fierce loyalty to his rider Kitiara, and Cyan Bloodbane, a green dragon that pulled an entire nation of elves into his twisted dreams. They were outwitted by Raistlin and eventually fought by the gold and silver dragons, led by Laurana and Tasslehof. To these come the dragons of Pern, which are uniformly in alignment with their riders and protect the planet from the falling of dread thread. Tolkien added Glaurung the Black; Magic, Nicol Bolas and Ugin; Niles, Nicodareus; Novik, Temeraire; Harry Potter, Norbert(a); and a myriad of authors a myriad of dragons ranging in personality and temperament from barely beasts to hidden puppet masters, wise counselors, and devastating enemies.

The mythology of dragons is a varied as the modern fantasy-fictions. They are evil and greedy in some parts of the West. They are the bringers of rain and guardians of treasure in the East. They have legs or not, wings of bats and birds and none at all, manes of spikes or fur, talons of eagles, and tails of scorpions. A dragon guarded the golden fleece in Colchis, and another killed Beowulf. The Green Dragon is the guardian in Whales, and the feathered snake is the embodiment of a Mezzo-American god.

The stories of dragons and their enemies or allies are among the most fantastic told both in genera and quality. One theory is that dragons are composed of the aspects of animals that we fear, potentially even through genetic encoding. They evoke a part of our deep subconscious, one shared by all people and transcendent of time or culture. They are accumulations of our admiration and trepidation over the natural world, and they bring supreme power with them for ill or good. The way in which we view them is fluid and reflects our view of the world itself and the world of our minds even more so.

Here are a bunch of things that I like about the world, random ramblings about those things, and maybe eventually a number of stories about the silly experiences I have had. Generally, I have written these posts and tried to keep them as positive as I can for my own purposes, but I hope you might find some enjoyment in them as well.