In which we chase Kevin the bird around the school

How many adults does it take to catch a bird?

During my first year teaching at a local charter school, I was running an ecology club. My three hearty troopers and I would go out on Wednesday mornings and wander around the cactus-infested meadows around the school looking for anything interesting. Every now and then we would be treated with a kestrel or a sighting of the herd of dear, but mostly, we just wandered back with shoes stuck full of cholla pods. Lesson one was how to pull cactus pods out of you without getting them stuck to your hand and then going through the grand cycle of pain.

The students, strangely, really liked this aspect of the club. I think they were enchanted with either the magical ability to handle cacti without getting stuck or the prospect of sneaking one of the pods into the binder of an enemy. I’m still not sure which. Either way, they would come back as happy as could be and name their newly found friends with names that ranged from Tom to Mr. Fuzzy-pants. I kept the cacti in a box to prevent the trapping of enemies.

As spring came, migrations started, and the traveling birds gave a little more variety to the club even if most of the students were still busy looking for the nearest cactus. Doors to the school were opened (not the windows because none of those actually exist at the school) and the warming breezes were welcomed in.

One day, a Say’s Phoebe (Sayornis saya) managed to find its way into one of the opened doors and into the cafeteria. I identified the bird, had some fun playing a recording of the call and having it respond, and pointed it out to the few students oblivious enough to miss a flapping-fluttering creature zooming about the cafeteria in panic as hundreds of students gathered below it. One of the ecology club kids named the bird Kevin because Up, and life went on as we figured Kevin would eventually find his way out of one of the doors that were definitely being left open against all security protocols for him.

The problem was that the cafeteria has a huge number of non-opening windows, including a row of picture windows right at the top of the wall. The walls are also about thirty feet tall. Thus, Kevin’s natural escape path from the teaming hoard of students in the mornings and lunchtimes was up to the top of the wall where he would batter himself futilely against the windows. There are also a number of hanging foam pads that are probably there to absorb some noise. In a school cafeteria, they are really there to prevent the cacophony that is lunch from echoing too much. They also provide a great perch for a bird weary of meeting windows head on.

After about four days of this, my boss decided it was important that the students see we were attempting to do something about Kevin. As the head of the ecology club, I was voluntold to chase the bird around the cafeteria with a net strapped to two extending poles. In agreement that it was time for Kevin to be free, I dutifully tried to heard Kevin into a corner with the net while blindly avoiding whatever random fifth-grader was underneath me trying to ask what I was doing…because chasing a bird around with a net obviously has no clear motive or anything.

The neo-industrial architecture and foam pads lead to this being a task much harder than it seems. Really, I got to play pac-man with the net as I tried to weave it around the pads. Then, I would attempt to not-quite break a window as I slapped the net against the giant aluminum beams. Meanwhile Kevin cleverly avoided all attempts to “save” him in a clear panic. The crowd was very appreciative with calls of encouragement, gasps, and oohs and aahs at the close calls.

Eventually, the sea of students wandered into class with no bird in net. In the passing period, I was able to force Kevin down to a lower height and nearly even caught him. This went on for about twenty minutes before the bird flew down the hall. Advantage: bird was now not fluttering around thirty feet above the floor. Disadvantage: Running down the hall banging a net against any light, duct, or ceiling fixture is in a word distracting.

To add to the show, our tech guy, a portly fellow, grabbed another net and the two of us tried to corral Kevin by dashing down the halls from opposite ends or the hall and usually being passed and then turning tail to follow the bird back the way one of us had come. There was no learning happening, and somehow Kevin still managed to avoid the nets even when he was stuck in a sky-light.

Eventually, fatigue set in, and Kevin actually landed on the ground. The next round of chasing got him around the corner where our Upper School Director was terrorized by a scene right out of the movie Birds. Then, a helpful third person opened the door at the end of that hall and the two net-wielding maniacs tore down the hall from the opposite end.

Kevin was free at last.

Here is a picture of me successfully catching a bird during a research trip (not Kevin). 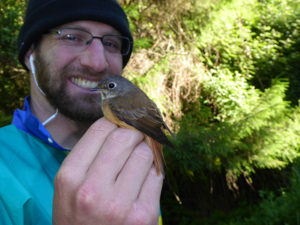